About a month ago, I was diagnosed with SIBO. That’s right, the blogger who loves to talk about gut health has a gut problem. SIBO (Small Intestinal Bacterial Overgrowth) is actually exactly what it sounds like — bacteria are living in your small intestine that shouldn’t be there. Whether it’s the “good” kind that propagate to aid in digestion and immune function in your large bowel, or the “bad” kind that can make you sick, bacteria do not tend to colonize a healthy small intestine.

So what happened? How did I get SIBO?

Because there’s no test for tracing this problem backwards, I can only guess how those little bugs crept their way into the wrong place. I’ll be hypothesizing, but my ideas are based on my Naturopath’s input, the research I’ve done on the topic, conversations with my father-in-law who’s a Gastroenterologist, and my experience of the onset of symptoms.

Factor 1: I went off of hormonal birth control (HBC) for the first time in 11 years, which affected my sleep, my ability to cope, and very likely disrupted my microbiome. It definitely did a number on my weight (I gained about 10 pounds, and shedding even one ounce felt impossible), and it reintroduced PCOS symptoms that I hadn’t dealt with in years (like unwanted hair growth, back-ne, and the weight) — very disheartening.

Factor 2: 2016 was quite possibly the most stressful year of my life. I worked two jobs, one of which was a relatively high-demand early stage start-up, and in allowing work to take over my life, I de-prioritized my health. Stress in and of itself is a risk factor for SIBO, as it disrupts the production of gastric juices and has been shown to impair motility (the movement of the bolus, or digesting ball of food, from the small to the large intestine). These two factors end up creating two potential problems:

Factor 3: Being overly stressed negatively affected my food choices and my ability to maintain my normal self-care routine. Although I was taking Dexter for regular morning walks, I all but stopped lifting weights and couldn’t keep a consistent climbing schedule for months on end.

Factor 4: I wasn’t getting enough sleep (or sleeping well). I was having trouble turning my brain off at night, I’d wake up in the middle of the night to use the bathroom, or I’d wake up feeling exhausted.

If you’ve read my gut health series, Why Gut Health Matters, you already know how stress, food choices, exercise, and sleep can impact the gut. So those are my best guesses as to what allowed SIBO to take hold for me.

I started seeing a Naturopathic Doctor (ND) over a year ago in an attempt to mitigate the potential hormonal hiccups that could arise from going off of HBC. I had started taking HBC back in college to control my PCOS symptoms, and since I’d had such great success clearing my acne with bone broth, I was pretty confident that it was safe to stop taking it.
I was wrong.
In the first six months after stopping HBC, my back started breaking out, I experienced random, intense headaches, I gained those 10 lbs, and I was feeling constantly fatigued, yet having trouble falling asleep. AND all the hair that I’d paid thousands of dollars to get laser-removed came back (in places where women aren’t supposed to have hair: neck, jaw line, chest, belly, and extending down my leg from the bikini line. No bueno.)

My goal with my ND was to keep my skin and hair issues at bay through nutritional supplements, herbs, and a healthy diet and lifestyle. But after a year of trying just about everything (and spending hundreds of dollars on supplements), nothing changed. I was still 10 lbs heavier and much hairier than I wanted to be, with no signs of improvement on the horizon.
My ND, who specializes in women’s fertility issues, was befuddled by my lack of response to the interventions she was employing. The interventions we were trying were effective with nearly all of her PCOS clients, and she was concerned that I was having an absorption problem. This prompted the conversation that something gut-related was at play.

What are the symptoms of SIBO?

I was experiencing near-constant gas and bloating, feeling puffy, occasional intestinal cramping, and frequent trips to the bathroom.

The best way to test for SIBO is to do a breath test. It’s kind of an involved process, because you have to alter your diet 24 hours in advance to ensure that the test is accurate, but it’s worth it if you suspect you might have SIBO. There are a few options out there, but I did the Aerodiagnostics Breath Test. My results came back positive for both types of bacteria, but were far higher for the type that produces hydrogen gas. Bacteria that produce hydrogen gas can cause diarrhea, while those that produce methane can cause constipation. (That’s why both symptoms are cause for concern.)

It all boils down to INFLAMMATION

The underlying problem that causes this array of symptoms is the inflammation that SIBO creates in the gut. When bacteria is living where it doesn’t belong in the intestinal tract, it irritates the lining, causing leaky gut and the host of issues that follow. (You might remember this infographic from my gut series.)

How to Treat SIBO

Treating SIBO requires more than a simple diet change. Nearly all professionals agree that an intervention that actively kills the offending organisms (such as an antibiotic or herbal protocol) is necessary to fully address the problem at its root. The most commonly researched antibiotic is called Rifaxamin, but it’s extremely expensive, and not all insurance carriers will agree to pay for it. (Mine rejected it twice, so I went with the herbal intervention, prescribed by my ND.)
While many conventional GI doctors don’t necessitate drastic dietary changes, most holistic practitioners (including my ND and many Functional Medicine doctors) recommend a restrictive dietary protocol that starves out (and therefore begins to kill off) the bugs in the small intestine. This diet is intended to quell symptoms, reduce inflammation, and improve the chances of success during the first pass of antibiotic treatment. It combines a Low FODMAP (Fermentable Oligosaccharides, Disaccharides, Monosaccharides and Polyols) diet, the Specific Carbohydrate Diet (SCD), and the Gut and Psychology Syndrome Diet (Gaps Diet), which amounts to a list of foods that will inspire some creativity* in the kitchen.
*That was my nice way of expressing my frustration when I first embarked on this journey. But there’s a silver lining to everything — I’ll be sharing some of the awesome recipes I’ve come up with to accommodate the restrictions of this diet. (You can check out my Chocolate Almond Butter Cups recipe here and my Icelandic Pesto here!)

I’ve created my own abbreviated chart as a quick reference for you. It doesn’t go through every single food option out there, but I do share which fruits, veggies, and dairy options you can eat in unlimited quantities, and which starches are allowed on the diet. Since these are the main food groups that are restricted on this diet, I focused there, but I’ve also outlined protein and fat guidelines as well. My guide also includes info on the main web resources I’ve been using as I’ve made my way through this experience. You can download the PDF by clicking HERE or the image below. 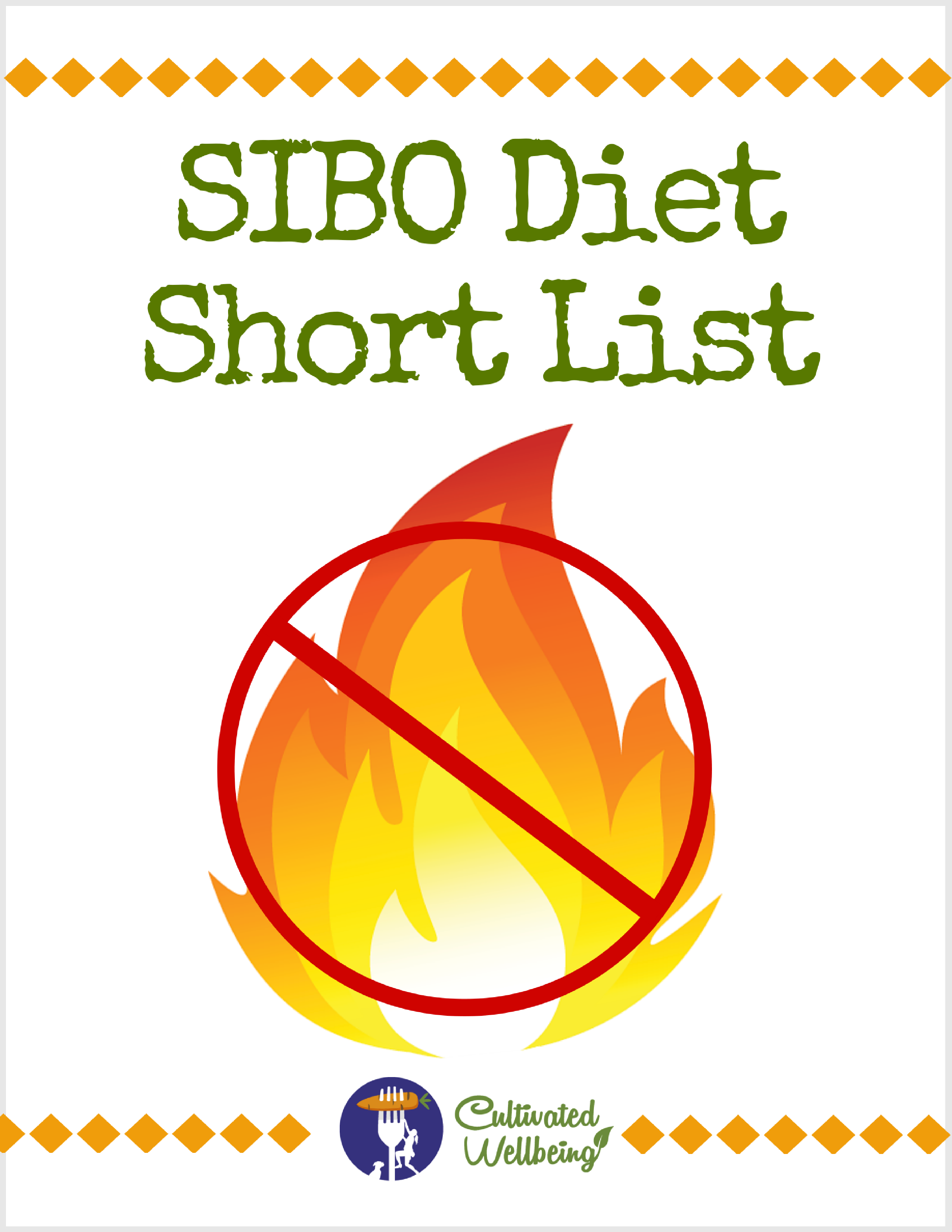 SIBO can become a chronic issue that’s not easily eradicated on the first try, working through the phases of this diet can dramatically increase the chances of a successful treatment the first time through.

Excepting my week-long hiatus in France — in which I literally ate whatever I wanted for a solid 7 days — I’ve been following the SIBO diet protocol (at about 85-90% fidelity) for almost two months now. The insurance rejection process and the Euro Trip pushed my treatment schedule back a couple of weeks, which is why I’ve gone so long on the restricted diet before taking an antibiotic (this was not ideal, but was unavoidable in my case). Most people start either herbal or conventional antibiotics much earlier than I was able to — after two weeks on the diet.

I can honestly report that I’ve felt amazing since removing the offending foods. I’ve lost 9 pounds, my “back-ne” cleared up almost entirely, I haven’t had a single headache, and I feel like a million bucks in the climbing gym — stronger with lots more energy. I’ve also been far less gassy. I can tell when I look in the mirror and by the way I feel in my clothes that I’m less inflamed and no longer bloated or puffy all the time.
I started the herbal antibiotic this week and will be on that regimen and in phase two of the SIBO diet (slightly less restricted) for the next four weeks. And then I’ll retest with that same breath test to see if there are any bugs left in my small intestine. I’m crossing my fingers that this will work on the first try!

The SIBO diet isn’t meant to be the solution — killing the bugs is the solution — but following the diet temporarily the fastest way to get the inflammation down and begin to feel like yourself again. FODMAPs feed the good bacteria in your large intestine that keep your digestive system, your immune system, and your overall health in good working order, and long-term elimination of these foods is not by any means ideal.
Pay attention to your body, and listen to what it’s telling you. If you find that gas returns, that some of those old familiar feelings of fatigue, exhaustion, sugar cravings, or perhaps depression return, consider retesting for SIBO. You might need another round of treatment. Maintenance through a healthy, whole foods diet, adequate exercise, and most importantly, stress management is the best way to prevent SIBO relapse.

Success! Now check your email to confirm your subscription.

I'm a wellness professional with a Master's in Integrative Health, passionate about spreading health, happiness and personal fulfillment to as many people as possible. I have a professional background in health and wellness, dietary supplements, and nutrition, and embark every day to live a well, balanced, happy life. In being true to myself and what I seek in life, I hope to inspire others to do the same, to cultivate wellbeing in their own lives.

Find more about me on:

This site uses Akismet to reduce spam. Learn how your comment data is processed.

Looking for something special?